by Florence James and Dymphna Cusack

The sensational novel that shocked Australia...

Come in Spinner won the 1948 Daily telegraph novel competition. It was first published in an abridged edition in 1951, as the subject matter - including rape, abortion and prostitution - was considered too controversial for the time. Even so, the book was an immediate sensation, with bookshops in both Sydney and Brisbane sold out within days.

Set in a beauty salon at the Hotel South Pacific in wartime Sydney, it revolves around the lives and loves of three women - Deb, Guinea and Claire. their romantic entanglements are further complicated by the tensions of war, with American troops in 'occupation' and at a time when anything could be obtained - for a price.

Rewritten by Florence James from the original manuscript, an unabridged edition was first published by Angus & Robertson in the 1980s and the book was made into an ABC miniseries in 1989.

'Quite astonishingly readable' - the Observer

Be the first to review Come in Spinner. 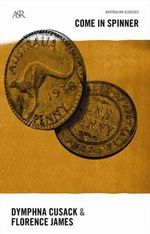 by Florence James and Dymphna Cusack