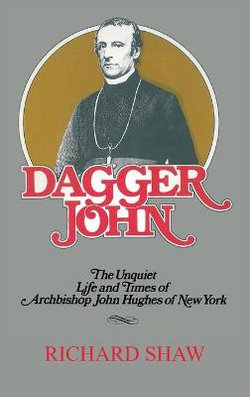 His opponents called him ""Dagger John"" with mixed derision and awe. His enemies, and there were many of them, used uglier words. His allies approached him with careful deference, his subordinates with trepidation. He was, in real life, the Most Reverend John Hughes, Archbishop of New York, a one-time day laborer and foreman of slaves who became a preacher and pamphleteer and a political force to be reckoned with. No demure ecclesiastic, Hughes was a hard-nosed battler for the rights of immigrant Irish in the middle decades of the 19th century. He championed their cause in an age when the Catholic Church was only grudgingly accepted as a partner in the American dream. Hughes was, moreover, the prototype of the autocratic prelate who would rule the American Catholic Church for the next one hundred years. Squelching democratic strivings among his clergy and laity whenever they appeared, he created a model for the highly structured Romanized Church that would eventually dominate the American religious scene. This book is the first major biography of John Hughes to be published in more than a century. It reflects new research into the life of Hughes and the details of his many struggles. It does not set out to explain the inner impulses of the man - who was, in the end, tightlipped about his private life. But it does shed new light on the public Hughes, a churchman who appeared in the newspapers as often as he appeared in the pulpit. It recounts his raucous, sometimes hilarious battles with the pre-Civil War nativists, with disgruntled clergy from his own Church, and with public figures such as James Gordon Bennett. It tells of his (often high-handed) dealings with revolutionaries, politicians, fellow bishops, apostates, Presidents, ranting bigots, Popes, and his own poor, belligerent, but fiercely devoted Catholic flock.

Be the first to review Dagger John.