For the Love of Science

by Keith Ward, A. C. Grayling,  Andrew Kelly and others

This item qualifies for FREE delivery
"Darwin: For the Love of Science" is a collection of specially commissioned essays to mark the bicentenary of the birth of Charles Darwin, one of the world's greatest scientists. It forms part of the worldwide Darwin 200 programme in 2009 which looks back at Darwin's achievements, debates his findings, and seeks to develop further his theories. This accessible book takes its title from Darwin's own assessment of what had determined his success as a man of science: 'the love of science - unbounded patience...industry in observing and collecting facts - and a fair share of invention as well as common sense.' Though the tone of the book is celebratory, it does not shy away from criticism, whether with reference to the creationist argument that evolution is inherently false, the intelligent design argument that sees a role for a maker in the process or more scientifically rigorous challenges. But its main focus is Darwin's work and its impact, in the context of his own times through to the present day. There are over 250 illustrations, some rarely seen before.

A. C. Grayling is Master of the New College of the Humanities, UK. He has written and edited numerous works of philosophy and is the author of biographies of Descartes and William Hazlitt.

He believes that philosophy should take an active, useful role in society.

He has been a regular contributor to The Times, Financial Times, Observer, Independent on Sunday, Economist, Literary Review, New Statesman and Prospect, and is a frequent and popular contributor to radio and television programmes, including Newsnight, Today, In Our Time, Start the Week and CNN news.

He is a Fellow of the World Economic Forum at Davos, and advises on many committees ranging from Drug Testing at Work to human rights groups.

Andrew Kelly is the Yarra Riverkeeper, part of an international organisation of Riverkeepers.

He has written numerous books for children and adults.

Be the first to review Darwin. 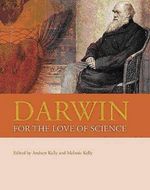 by Keith Ward, A. C. Grayling,  Andrew Kelly and others