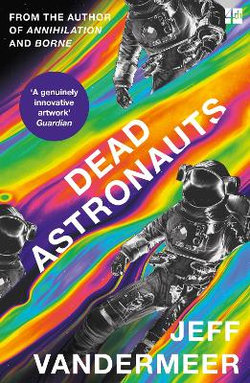 Under the watchful eye of The Company, three characters -- Grayson, Morse and Chen -- shapeshifters, amorphous, part human, part extensions of the landscape, make their way through forces that would consume them. A blue fox, a giant fish and language stretched to the limit.

A messianic blue fox who slips through warrens of time and space on a mysterious mission. A homeless woman haunted by a demon who finds the key to all things in a strange journal. A giant leviathan of a fish, centuries old, who hides a secret, remembering a past that may not be its own. Three ragtag rebels waging an endless war for the fate of the world against an all-powerful corporation. A raving madman who wanders the desert lost in the past, haunted by his own creation: an invisible monster whose name he has forgotten and whose purpose remains hidden.

Jeff VanderMeer's Dead Astronauts presents a City with no name of its own where, in the shadow of the all-powerful Company, lives human and otherwise converge in terrifying and miraculous ways. At stake: the fate of the future, the fate of Earth - all the Earths.

His latest novel is Borne,  which Colson Whitehead called “a thorough marvel.” He is also known for his critically acclaimed NYT-bestselling Southern Reach trilogy from FSG, which won the Shirley Jackson Award and Nebula Award.

The trilogy also prompted the New Yorker to call the author “the weird Thoreau” and has been acquired by publishers in 35 other countries, with Paramount Pictures releasing a movie in 2018.

VanderMeer’s nonfiction has appeared in the New York Times, the Guardian, the Atlantic.com, Vulture, Esquire.com, and the Los Angeles Times.

He has taught at the Yale Writers’ Conference, lectured at MIT, Brown, and the Library of Congress, and serves as the co-director of Shared Worlds, a unique teen writing camp.

Be the first to review Dead Astronauts.