The Return of Daud

The Official Sequel to the Bestselling Action Stealth Game, Dishonored

In the last days of his life, a killer returns to undertake the greatest assassination ever conceived, seeking meaning in his existence and struggling to find peace before he dies. Written in close collaboration with the development team at Arkane Studios, this official sequel to the award-winning video game Dishonored 2 picks up the adventure where the game left off.

Set in the fictional, plague-ridden industrial city of Dunwall, Dishonored follows the story of Corvo Attano, bodyguard to the Empress of the Isles. He is framed for her murder and forced to become an assassin, seeking revenge on those who conspired against him.

Be the first to review Dishonored . 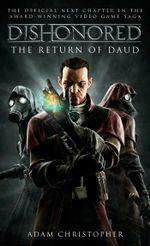