Do Not Open This Book

by Heath McKenzie and Andy Lee

Oh! You opened the book.

I assume that was an accident?

No problem, accidents happen. I'm not even angry.

Monster will do anything for you to not open this book, but what will happen if you do?

Young readers will love doing everything they are asked not to, and turning the pages to discover Monster's hilarious secret at the end of this funny picture book. Heath McKenzie lives and works in Melbourne, Australia (in a normal house, not an alien zoo, despite what it may look like).

He’s fairly sure he’s never met an alien, but then again, how can anyone REALLY be sure they haven’t? He did once see something weird in the sky that was probably a UFO there’s no other explanation for it!

When not seeing flying saucers, Heath writes stories and draws dragons, werewolves, sloths and the occasional princess or footy hero! Not to mention angry greepers, flurps and twozzlers.

Be the first to review Do Not Open This Book. 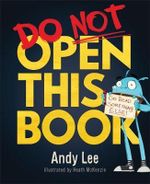 Do Not Open This Book

by Heath McKenzie and Andy Lee