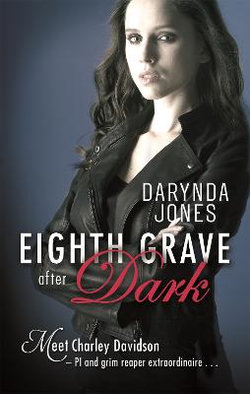 Charley Davidson has enough to be getting on with. She is, after all, incredibly pregnant and feeling like she could pop at any moment. But, just her luck, twelve deadly beasts from hell have chosen this time to escape, and they've made Charley their target. She takes refuge at the only place they can't get to her: the grounds of an abandoned convent. Before long, Charley also has a new case to hold her attention: the decades-old murder of a newly-vowed nun she keeps seeing in the shadows of the convent.

Add to that the still unsolved murder of her father, the strange behavior of her husband, and Charley's tendency to attract the, shall we say, undead, and she has her hands full . . . but also tied. While the angry hellhounds can't traverse the consecrated soil, they lurk beyond its borders like evil sentries, so Charley has been forbidden from leaving the sacred grounds and is powerless to get the answers she wants.

Luckily, she has her loyal team with her, and they're a scrappy bunch. They scour the prophesies, searching for clues on the Twelve, and their presence is comforting - it's almost as though they've all been drawn to her as part of a bigger picture . . . But the good feelings don't last for long because Charley is about to get the surprise of her crazy, mixed-up, supernatural life.

'Hilarious and heartfelt, sexy and surprising...I'm begging for the next one!!' - J.R. Ward

'I am furiously envious of Darynda Jones and rue the day she came up with this concept, damn her eyes. First Grave on the Right kidnapped me from the first paragraph.' - Mary Janice Davidson

Winner of the 2009 Golden Heart for Best Paranormal Romance for her manuscript FIRST GRAVE ON THE RIGHT, Darynda was born spinning tales of dashing damsels and heroes in distress for any unfortunate soul who happened by, annoying man and beast alike.

After the Golden Heart final, she pimped herself as best she could, landed an amazing agent and sold to St. Martin's Press in a three-book deal.

She is thrilled to have the prestigious Piatkus publish the series in the UK. Darynda lives in the United States in a beautiful place called the Land of Enchantment, also known as New Mexico, with her husband of more than 25 years and two beautiful sons, the Mighty, Mighty Jones Boys.

Be the first to review Eighth Grave after Dark.