From the author of the best-sellingA Peace to End All Peace(&#8220;extraordinarily ambitious, provocative, and vividly written&#8221;&#8211;Washington Post Book World), a dramatic reassessment of the causes of the Great War. The early summer of 1914 was the most glorious Europeans could remember. But, behind the scenes, the most destructive war the world had yet known was moving inexorably into being, a war that would continue to resonate into the twenty-first century. The question of how it began has long vexed historians. Many have cited the assassination of Archduke Franz Ferdin&and; others have concluded that it was nobody&#8217;s fault. But David Fromkin&#8211;whose account is based on the latest scholarship&#8211;provides a different answer. He makes plain that hostilities were commenced deliberately. In a gripping narrative that has eerie parallels to events in our own time, Fromkin shows that not one but two wars were waged, and that the first served as pretext for the second. Shedding light on such current issues as preemptive war and terrorism, he provides detailed descriptions of the negotiations and incisive portraits of the diplomats, generals, and rulers&#8211;the Kaiser of Germany, the Czar of Russia, the Prime Minister of England, among other key players. And he reveals how and why diplomacy was doomed to fail.

Be the first to review Europe's Last Summer. 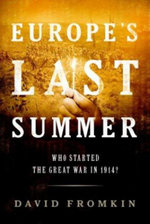