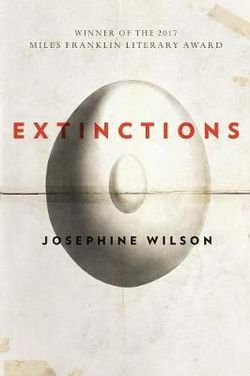 Professor Frederick Lothian, retired engineer, world expert on concrete and connoisseur of modernist design, has quarantined himself from life by moving to a retirement village. His wife, Martha, is dead and his two adult children are lost to him in their own ways. Surrounded and obstructed by the debris of his life – objects he has collected over many years and tells himself he is keeping for his daughter – he is determined to be miserable, but is tired of his existence and of the life he has chosen.

When a series of unfortunate incidents forces him and his neighbour, Jan, together, he begins to realise the damage done by the accumulation of a lifetime’s secrets and lies, and to comprehend his own shortcomings. Finally, Frederick Lothian has the opportunity to build something meaningful for the ones he loves.

Humorous, poignant and galvanising by turns, Extinctions is a novel about all kinds of extinction – natural, racial, national and personal – and what we can do to prevent them.

Who is prepared to deprive life of a significant dénouement? Jean Améry

Out the window there was nothing that could be called poetry, nothing wind-swept, billowing, tossing or turning in a streaky sky, nothing other than a taut blue sky and the low drone of air conditioners. In car parks across the city women pulled on soft cotton hats and cowered under brollies. Babies kicked and squalled, itchy with heat rash. Fridges groaned. Water dripped from old rubber seals. Milk soured. Fans turned. The grid strained.

Light, an excess of light, as if there had been some kind of global mistake, a wrongful accounting.

At midday the UV index hovered on perilous, dispensed like a terrible penance. If the man in Number 7 could remove the tiled roof of his two bedroom unit and look up into that vaulted sky it would not be out of the question to spot an evil archangel belaying through that dreadful gouge and dropping right into the lounge room where he sat, newspaper folded back, pen uncapped, reading the columns.

Frederick Eames picked up the remote and pointed it at the cream cylinder on the wall. Chlorine molecules rose around him, heaven-bent. Unaware of the presence of angels (either avenging or beneficent) he shuffled through the pages. Ossibus et capita inhumato. Fred had returned to Latin around the time of his wife’s diagnosis and he still found it a comfort. It had been surprisingly easy to find a tutor with the same passion for a dead language— a call to the University and a consultation with the phone book and he had his man, a retired Classics teacher from a private boys school. They were both Catholic by birth, Frederick lapsed, the Professor by nature skeptical, but they had enjoyed their time together, which was largely spent mourning the introduction of Novus Ordo and the abandoning of the Latin mass.

One Saturday the Professor’s name appeared in the columns. An aneurysm on the golf course? A stroke in the shower? There were no clues in the columns. If the Professor had not been divorced he could have called the man’s wife. There were no children either. He believed there was a dog called Minos, but where could you go with that? And what did it matter how you died once you were dead?

Sometime in the 1980s Martha had dragged him off to pray with a group of Tibetan Monks. The similarities between Buddhist and Gregorian chant were astonishing, but when he tried to tell Martha she refused to listen. ‘You’re ruining it,’ she snapped. After Martha’s death he returned briefly to the church and took to hanging around after Mass to discuss his ecumenical epiphany with the parish priest, but the stupid man had glazed over and moved onto a group of parishioners fund raising for a new toilet block at the Primary School.

The cistern flushed and filled in the next-door unit. He angled the paper towards the window. Despite the excess of light outside he had no northern aspect to speak of. He blamed his daughter. It was Caroline’s fault he was here. He hated the word ‘retirement’, but not as much as he hated the word ‘Village’, as if ageing made you a peasant or a fool. Herein lives the Village idiot. At 69 he was getting on, but did it have to be rammed down his throat? He tried to inhabit only those sections of the complex designed for the more able-bodied citizens of St. Sylvan’s, but he still managed to run into ancient women on Zimmers and signs reminding him to Mind the Step, to go This Way for Wheelchair Access and That way for a Courtesy Buggy. Old had infiltrated his being, and that had to be the reason his left knee kept giving way and his right eye was clouding over in bright light and emitting the odd salty tear, as it was doing right now onto the columns.

He took off his glasses to wipe his eye. Out the window a blurry figure was making his way across the open quadrangle in the direction of the dining room. Was that Tom Chelmsely? Frederick stood up and put on his glasses. What was he doing out there in the heat? Look at the poor old fellow, with his frame and leather braces and his bent old back, hanging on by a thread to his Villa. Any minute now Tom would be up for reclassification, and bundled out of his two- bedroom semi-detached into a tiny single brick box with a television, a kettle and a pop-up toaster. Look at him. It was a wonder they had ever let Tom buy into the Independent Area.

Frederick sat down. It was just too painful to watch Tom hobbling on the Zimmer in the fierce heat. Why would you bother going all that way for an indigestible meal? There was no shade out there and the temperature must be well over forty degrees. Fred had been to one or two meals at the dining room and he wouldn’t be going again. Tom could have called for a gopher to take him to, but then that might have given the social workers a leg-up when they came to re-assess his meds and mobility and check off boxes and add up the columns and announce that Mr. Thomas H. Chelmsely was no longer capable of reaching down to wipe himself or squeeze out his own teabag, and he and all that was his were to be shrink-wrapped and trolleyed without ado across the green to the Supported Living Units, which were just a hop, step and a jump from the High Care Facility, where they were all headed anyway. They might as well have erected the Villas over a sawdust pit in the ground, because that was how close death was at St. Sylvan’s. No archangel beating above you with soft Latin wings, but a dark stinking shit-hole right beneath your feet. Josephine Wilson was born in England. She went to Australia in 1966. She has a Bachelor of Arts in Comparative Literature, a MA Prelim from UWA, and a MA in Creative Arts from Queensland University.

She is co-author of Geography of Haunted Places and several web-based hypertext works. She has reviewed for Realtime, Artlink Magazine and The West Australian. She is the author of the novel Cusp. She is the winner of the Dorothy Hewett award for an unpublished manuscript for her novel 'Extinctions', which went on to win the Miles Franklin Award in 2017.

Be the first to review Extinctions.