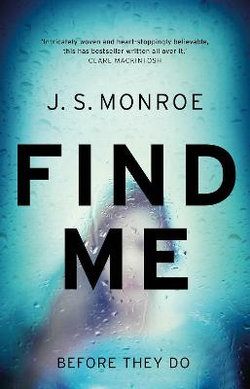 Rosa committed suicide five years ago. But is she really gone? Because her boyfriend gets a cryptic email apparently from Rosa.

Five years ago, Rosa walked to Cromer pier in the dead of night. She looked into the dark swirling water below, and she jumped.

She was a brilliant young Cambridge student who had just lost her father. Her death was tragic, but not unexpected. Was that what really happened?

The coroner says it was. But Rosa’s boyfriend Jar can’t let go. He hallucinates, seeing Rosa everywhere a face on the train, a distant figure on the hillside.

He is obsessed with proving that she is still alive. And then he gets an email. Find me, Jar. Find me, before they do…

J.S. Monroe, the writing name of a well-known British author and journalist, read English at Cambridge University, worked as a freelance journalist in London and was a regular contributor to BBC Radio 4. He was also a foreign correspondent in Delhi for the Daily Telegraph and was on its staff in London as weekend editor. He is the author of five other novels and lives in Wiltshire, England, with his wife and their three children.

Be the first to review Find Me. 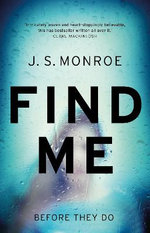 Thriller / suspense Domestic Noir
Hold on while we process your request.