A Vet's Life with Scotland's Deer

John Fletcher's belief, not only in the amazing health benefits of venison, but also in the diversification of farming and more humane methods of meat production, prompted him to create ?perhaps the first new domesticated animal for 5,000 years? at Rediehill, a small hill farm in Fife. After some spectacular ups and downs, he and his wife established a profitable, unsubsidised business selling venison-the healthiest red meat you can eat-from the farm shop and by mail order. They have since won the Queen's award for Export Achievement, and as the business has expanded and developed over the years, Fletcher's passion has taken him across the globe. Fletcher's Game traces his colourful life-researching deer behaviour on the Isle of Rum, consultancy work for Sheikh Zayed of Abu Dhabi, delivering deer to the Swiss Alps, inventing the Veniburger and his involvement with the enormously popular farmer's Markets in Scotland. Fletcher also asks many important questions about mankind, our early history, why we hunt and the importance of domestication, against a background of amusing anecdotes.

Be the first to review Fletcher's Game. 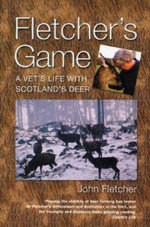