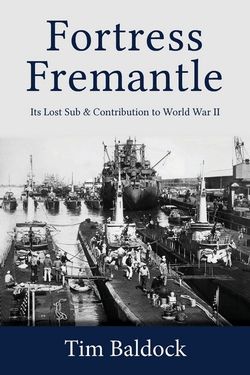 In 2010 Tim commenced as a tour guide with the Rottnest Volunteer Guides Association. In the course of his duties he discovered aspects of Western Australia's past, particularly about the Port of Fremantle in World War Two, of which he had no idea about, despite having spent so much of his early years in and around the Port. It was this newfound knowledge and his subsequent thirst to continuing researching such history that inspired him to write Fortress Fremantle.

Fremantle was the world's second largest submarine base in the Second World War and housed submarines from the United States, England and The Netherlands. This followed Japan's invasion, and occupation of, much of the Pacific after their attack on Pearl Harbour in December 1941.

The contribution of this submarine fleet to the eventual Allied victory was immense, with some of the United States' most successful ships based there.

Many submarines were lost at sea over the course of the war, and the USS Bullhead, the memory of which this book is dedicated to, was the last American ship to be lost in World War Two. After leaving the Port of Fremantle in July 1945, she was sunk off the coast of Bali on 6 August 1945, the same day as the first atomic bomb was dropped on the Japanese city of Hiroshima.

In total, more than 170 submarines were based in Fremantle over the course of the war. Such was the importance of this base, that the Port was closed to the public and most people who lived in Fremantle had no idea of the significance of their contribution to the war effort.

To protect the Port, an array of coastal defences existed which stretched from Swanbourne in the north, to Point Peron in the south, and out to Rottnest Island off the coast. The guns at Rottnest could engage enemy targets from a distance of 28 kilometres, long before an attacking battleship could come within range of Fremantle.

In his book, Tim talks about life in Fremantle during the war, and the tensions that existed between Australian and American servicemen. He writes about the fall of Singapore to Australia's north, the bombing of Darwin and the Japanese plans for the invasion and occupation of Australia.

He talks about how naval battle changed in World War II with the advent of air power and the aircraft carrier; a new weapon which was capable of inflicting damage on the enemy from hundreds of kilometres away, and subsequently the demise of the some of the world's greatest battleships at the hands of the airpower they had previously scoffed at. The Battle of the Coral Sea, which was a turning point in the war in 1942, was the first naval battle in history where the opposing fleets never cast eyes on each other and it was decided by air power.

A budding military historian, with a particular interest in the Pacific Campaign of World War II, this is Tim's first book on the subject. Fortress Fremantle will be launched at the historic Old Boys' School in Fremantle with all profits raised from the sale of the book being donated to the Fremantle Foundation.

Be the first to review Fortress Fremantle.