How an Ordinary Family Fought an Extraordinary Battle

Freeing Peter tells the extraordinary true story of how an ordinary Australian family took on the Egyptian government to get Peter Greste out of prison.

When Peter Greste’s family learned he’d been arrested in Egypt, they were shocked but not panicked. Peter had been a foreign correspondent for two decades in numerous dangerous countries, and been arrested before. Moreover, he was only in Egypt on temporary assignment – he couldn’t have got into too much trouble.

Quickly, though, the gravity of his situation became apparent. Peter was put into solitary confinement and eventually charged with threatening national security. No evidence was ever produced, but after a sham trial he was given a seven-year sentence.

Peter’s family, meanwhile, went to work on the campaign to free him. Where others might have waited on official channels, the Grestes were soon managing an international media campaign, with such intensity that for the 400 days Peter spent in prison his plight was seldom out of the headlines. The process was by no means plain sailing, nor was there always agreement, but the Grestes were galvanised rather than paralysed by the crisis.

Here each of them writes frankly and movingly about how they worked as a family, and the times they didn’t: about the daily uncertainty, the paucity of information, the strain of decision-making, the emotional visits to Peter in prison, the incomprehensible Egyptian legal system, and, most importantly, the overwhelming support from every level of Australian society. For his part, Peter superbly depicts the effects of incarceration on his state of mind, and his battle not to construct a mental prison within the physical one.

Freeing Peter is an inspirational story about fortitude, resilience, and a highly functional family whose unity proved to be the saving of them.

Biography:
Juris and Lois Greste are the Brisbane-based parents of Peter Greste, an award-winning foreign correspondent, and Andrew and Michael Greste. Andrew, a farmer, lives in Wee Waa; Michael, a police officer, lives in Toowoomba.

Juris and Lois Greste are the Latvian-born parents of Peter Greste, who as an Al Jazeera journalist was imprisoned in Egypt in 2013.

Andrew, a farmer, is Peter's older brother, and Michael, a police officer, is his younger brother. They live in Queensland.

Be the first to review Freeing Peter. 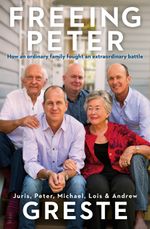