From the Source - Spain

Spain's Most Authentic Recipes from the People That Know Them Best

Lonely Planet presents Spain's most authentic dishes - direct from the kitchens where they were perfected.

In recent years regional Spanish cuisine has won attention and praise thanks to award-winning restaurants in Catalonia and the Basque Country (some of these restaurants are featured in From the Source Spain). Food in Spain is very closely connected to the country's regions, with local specialities based on regional ingredients, whether that's seafood, meat or vegetables. As a result, there's no better way of of getting to know Spanish culture than through its food (and wine).

From the Source Spain is the key that unlocks Spain's culinary secrets. With 60 recipes by leading local chefs, it takes us through this fascinating country, rich in history. We travel from Barcelona's fashionable bars for Catalan cooking to the getaway island of Mallorca (home of unique black pigs), then to the central heartlands around Madrid where tasty stews and roast lamb dominate. In the northwest regions of the Basque country, Asturias and Galicia, we discover Spain's most adventurous and contemporary cooking, as ambitious chefs conjure up new twists on classic dishes. And in the sun-drenched south of Spain we encounter interesting flavours and reminders of the Moors.

Hailed as 'a future classic', this series of books connects home cooks with the traditions of each country's regions. There are dishes for every ability, from artful pintxos snacks to simple and filling stews and soups. There is no better way to recapture those travel memories than by exploring this book.

Every recipe features an expertly written introduction and amazing and original on-site photography. Meet the chefs, encounter the region and history, see the food, and try the recipe!

'Lonely Planet guides are, quite simply, like no other.' - New York Times

'Lonely Planet. It's on everyone's bookshelves; it's in every traveller's hands. It's on mobile phones. It's on the Internet. It's everywhere, and it's telling entire generations of people how to travel the world.' - Fairfax Media (Australia) Be the first to review From the Source - Spain. 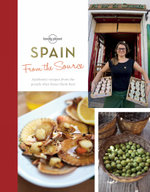 From the Source - Spain