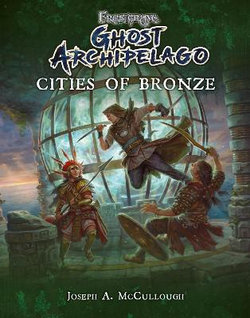 A supplement for Frostgrave: Ghost Archipelago, focusing on the Dricheans, the Lost Isles' most powerful faction, and featuring new scenarios, creatures, crew options, and treasure.

The islands of the Ghost Archipelago are covered in the ruins of ancient civilizations, but there is one group whose culture still thrives and whose power still grows the Dricheans. Divided into many small kingdoms and city-states that wage near-constant war with snake-men, native tribes, and with each other, the Dricheans are renowned for the gleaming bronze of their weapons and armour, and their martial prowess. While adventurers exploring the Lost Isles will face many threats, the Dricheans are certainly the most organized and militaristic.

This supplement for Ghost Archipelago: Fantasy Wargames in the Lost Isles examines the scattered realms of the Dricheans, presenting players with three new mini-campaigns featuring these bronze-armed warriors. Also presented are optional rules for using Drichean Heritors, Wardens, and Crew, and guidelines for creating your own Drichean kingdoms.

Joseph A. McCullough is the author of several non-fiction books including A Pocket History of Ireland, Zombies: A Hunter's Guide, and Dragonslayers: From Beowulf to St. George.

In addition, his fantasy short stories have appeared in various books and magazines such as Black Gate, Lords of Swords, and Adventure Mystery Tales.

He is also the creator of the wargame, Frostgrave: Fantasy Wargames in the Frozen City, and co-wrote The Grey Mountains, a supplement for the Middle-Earth Role-Playing Game.

Dmitry Burmak is a freelance artist from Moscow, Russia. After graduating as an engineer, he decided to change his career plans and took another degree in Fine Art. Dmitry started as an artist in the video games industry and now works as a freelance illustrator with his wife Kate, who is also an artist. Dmitry specializes in fantasy and sci-fi art for roleplaying games, card games and video games.

Be the first to review Frostgrave: Ghost Archipelago. 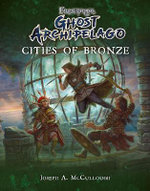