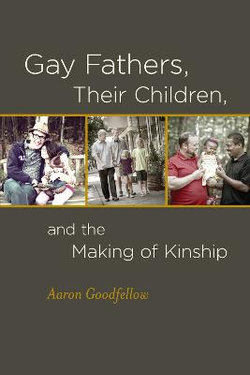 Gay Fathers, Their Children, and the Making of Kinship

While the topic of gay marriage and families continues to be popular in the media, few scholarly works focus on gay men with children. Based on ten years of fieldwork among gay families living in the rural, suburban, and urban area of the eastern United States, Gay Fathers, Their Children, and the Making of Kinship presents a beautifully written and meticulously argued ethnography of gay men and the families they have formed.

In a culture that places a premium on biology as the founding event of paternity, Aaron Goodfellow poses the question: Can the signing of legal contracts and the public performances of care replace biological birth as the singular event marking the creation of fathers? Beginning with a comprehensive review of the relevant literature in this field, four chapters--each presenting a particular picture of paternity--explore a range of issues, such as interracial adoption, surrogacy, the importance of physical resemblance in familial relationships, single parenthood, delinquency, and the ways in which the state may come to define the norms of health. The author deftly illustrates how fatherhood for gay men draws on established biological, theological, and legal images of the family often thought oppressive to the emergence of queer forms of social life.

Chosen with care and described with great sensitivity, each carefully researched case examines gay fatherhood through life narratives. Painstakingly theorized, Gay Fathers, Their Children, and the Making of Kinship contends that gay families are one of the most important areas to which social scientists might turn in order to understand how law, popular culture, and biology are simultaneously made manifest and interrogated in everyday life. By focusing specifically on gay fathers, Goodfellow produces an anthropological account of how paternity, sexuality, and masculinity are leveraged in relations of care between gay fathers and their children.

Be the first to review Gay Fathers.

Gay Fathers, Their Children, and the Making of Kinship