The battle at Guadalcanal--which began eight months to the day after Pearl Harbor--marked the first American offensive of World War II. It was a brutal six-month campaign that cost the lives of some 7,000 Americans and over 30,000 Japanese. This volume, ten years in the writing, recounts the full story of the critical campaign for Guadalcanal and is based on first-time translations of official Japanese Defense Agency accounts and recently declassified U.S. radio intelligence, Guadalcanal recreates the battle--on land, at sea, and in the air--as never before: it examines the feelings of both American and Japanese soldiers, the strategies and conflicts of their commanders, and the strengths and weaknesses of various fighting units.

Be the first to review Guadalcanal. 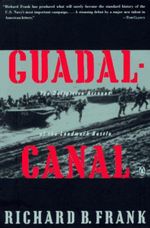