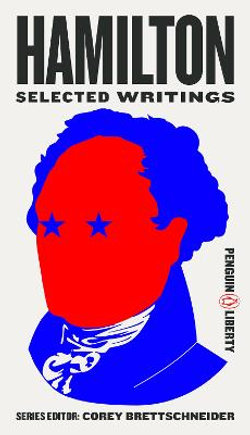 Alexander Hamilton in his own words. Here is a short and accessible collection of the Founding Father's most essential writings that reflects his constitutional legacy, as part of the new Penguin Liberty series.

Penguin Liberty is a newly curated series of historical, political and legal classic texts relevant to constitutional rights. This collection includes key historic speeches, pamphlets, essays and letters by Alexander Hamilton, focusing on his legacy as the author of the majority of the essays of The Federalist Papers, defending the U.S. Constitution. Each Penguin Liberty volume will feature a series introduction and volume introduction by series editor Corey Brettschneider.

His recent writing has appeared in The New York Times, Politico, and The Washington Post. His new book is The Oath and the Office- A Guide to the Constitution for Future Presidents, which Kirkus calls "vital reading for all Americans." Brettschneider is frequently interviewed about constitutional issues on BBC, Sirius XM, and other media outlets.

He is also the author of two books about constitutional law and civil liberties and numerous articles that appear in top academic journals and law reviews. His constitutional law casebook is widely used in classrooms throughout the United States. Brettschneider holds a PhD in politics from Princeton and a JD from Stanford Law School.

Be the first to review Hamilton.