Unlock new information about your favourite characters from the Harry Potter movies with this definitive coffee table book profiling the good, the bad, and everything in between.

Concept art, behind-the-scenes imagery, and film stills track everyone from Harry, Hermione and Ron to Dobby, Mad-Eye Moody and Dolores Umbridge, telling their complete stories as they evolve throughout the film series. The ultimate Harry Potter character overview.

About the Author
Jody Revenson is a seasoned writer with a strong background in the arts. Singer, composer, and performer. Armchair photographer. Bad dancer. Student of popular culture, American and European history, architecture, photography, mixed-media crafts, comic books, mythology, illustration, and traveling. Author of Harry Potter The Creature Vault and Harry Potter The Book of Magical Places as well as several Disney titles.

Jody Revenson has written extensively about the Harry Potter films, with her most recent books being J.K. Rowling's Wizarding World: Movie Magic: Volume One and Harry Potter: The Artifact Vault.

In her first foray into the wizarding world, she edited and contributed to the New York Times bestsellers Harry Potter: Film Wizardry and Harry Potter: Page to Screen.

Be the first to review Harry Potter. 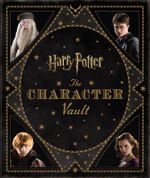