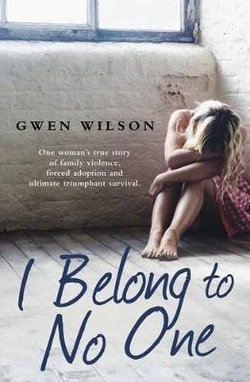 I Belong to No One

A teenager in the 1970s, Gwen Wilson grew up in Western Sydney. It was a tough childhood. Illegitimate, fatherless - her mother in and out of psychiatric hospitals; it would have been easy for anyone to despair and give up. Yet Gwen had hope. Despite it all, she was a good student, fighting hard for a scholarship and a brighter future.

Then she met Colin. Someone to love who would love her back. But that short-lived love wasn't the sanctuary Gwen was looking for. It was the start of a living hell. Rape was just the beginning. By sixteen she was pregnant, her education abandoned. Australian society did not tolerate single mothers; prejudice and discrimination followed her everywhere. In an effort to save her son, Jason, from the illegitimacy and deprivation she'd grown up with, Gwen chose to marry Colin - and too quickly the nightmare of physical abuse, poverty and homelessness seemed inescapable.

In 1974, in the dying days of the forced adoption era in Australia, this isolated teenager was compelled to make a decision about her child that would tear her life apart, one she would never truly come to terms with.

I BELONG TO NO ONE is one woman's story of all she lost and how hard she fought to survive and eventually triumph.

I feel myself drift away from my body, in that space between wakefulness and sleep. I drift up to the ceiling and I float, unable to control my path, bumping into walls and ceiling and corners of the room. Disconnected from what I see below, I am just an observer. Interested, but not involved. My tiny body is curled in the bed below, and I know it is mine, but in that moment I feel as if I’m somewhere else. Mum steps into the room, arms cradling some freshly ironed clothes, and passes soundlessly to the baby-sized wardrobe wedged in the niche between the fireplace and the wall. I watch her as she opens a drawer and carefully places the folded items inside, smoothing them down and sliding the drawer closed again with methodical movements.

So there you are, Mum.

So, there was a time when I knew you. In that time before I could talk, maybe before I was three years old. You wrote to my father that I didn’t speak until that age. You were worried for me, but I didn’t know it then. It was something revealed to me much, much later when you gave me Dad’s replies.

Before I could talk I often left my body, but I never left the room that held my bed – perhaps I couldn’t. Up there I had no strength, no use of my arms and legs. I couldn’t walk or crawl through the air, choose in which direction to go. I surrendered to hovering, never straying too far from my form lying motionless in the bed below.

My rational mind tells me this must be a false memory. It sounds weird even to me. I know it shouldn’t be possible, and yet it persists there in the recesses of my mind. Something from long ago, something that was true then, and is still true to me today.

It smells of damp earth underneath the house. The odour permeates my skin and invades my nostrils. I like it down here. I like the secret nature of it. Underneath the house is an otherworldly place, a house within a house, sealed from the outside world by its bricked-in walls and sagging wooden doors tugged shut behind me.

Above, the house is quiet. There are no sounds of television or people. There is Mum.

Mum, lying in a motionless trance on her bed in the front room. She seems so far away. Even if I crawled commando-style, I could not reach the underneath of her room. There, at the front of the house, the floor is almost level with the ground. Here, at the back, I stand upright, to my full six-year-old height, and I can breathe in the smell. I stand in the gloom and soak up the mustiness around me. The silence, only broken by my breath echoing in a rhythmic timelessness,  presses against my ears. Waiting, listening, being.

This narrative is one part of the tapestry of my life. I have told it as factually as possible, yet I know that not every detail will be precise. It is recorded in the way I remember it in the fibres of my being. Those who wove my threads may remember an event or a conversation in a different time and place, or have a different inter- pretation of their meaning or significance.

Memories of my mother are always like this, perceived from a distance and loaded with a sense of detachment and inertia, even though I know she was once a busy, functioning person. Before me. In the days before my existence. In the days when she lived at Lavender Bay with her mother and her sister, and with my brother Steve and his cousins. ‘Our cousins,’ I correct myself. In the days before we came to live in Old Guildford. In the days before she was cast adrift to the isolated nothingness of her new location, burdened with a nine-year-old son, a baby daughter and a shabby old house she couldn’t possibly look after.

‘She has a lot on her plate,’ the neighbours used to say. ‘Imagine bringing up two children on your own and the girl just a baby? How she copes in that old house, what with going to work and all . . .’

They said the house was jerry-built. I knew what it meant. The house was cobbled together from scraps of timber, fibro and Masonite

– bits other people threw away. Our roof was not terracotta tiles like the others in the street. It was tin. Corrugated iron, they called it. When the sun beat down, the heat spread through each room like an oven. We gasped and baked and prayed for a Southerly Buster. We knew it would come in the evening: we could smell its approach. It roared up the hill from the bottom of the street, and found us perched at the corner, wilting. As it rushed towards the south-facing window, I ran to open the front door opposite. The wind raged through, dragging the accumulated hot air in and out, away with it.

‘Hot air rises, cool air drops,’ Steve told me. ‘That’s why they put in sash windows. They open at the top and bottom and drag the air around and around.’

That was hard for me to understand. My brother was nine years older, and he knew so much more than I did.

Winter felt different. The tin roof carried cold air into every corner of the house. Draughts whipped around the gaps in the walls and the windows, and out of the holes in the skirting board where the mice had eaten through. Steve stuffed the holes with steel wool. He said the mice would eat it and the steel would kill them; that way, we wouldn’t have to lay so many traps. I hated finding little grey mice lying stiff and strangled in the traps when we woke each morning. Sometimes their tiny tongues were sticking out and their eyes were wide and staring. It made me sad that they died in pain. Of course I didn’t realise it might have been just as painful to die with a belly full of steel wool.

I liked our tin roof best when it rained, and best of all when it rained hard at night and I was tucked in bed. I imagined a team of wild horses above me, or a chariot being pulled at full gallop. The horses would be charging this way and that, and as their thudding feet came nearer I imagined they would fall through onto my bed beside me.

It was never horses that fell through, though, it was the rain. Seeking out every crack and opening where gutters had rusted away, or where sheets of iron had torn loose and lifted in the wind, the rain seeped into the house, drip by drip, slowly at times and like the popping of a machine gun at others. We ran to collect all the buckets and saucepans we could find and lined them up under the drips. We didn’t want our clothes and books or our few bits of furniture to get wet. It didn’t matter about the f loor – we only had linoleum, not carpet like our neighbours. If we didn’t catch the leaks in time, the water ran in rivulets to the central room. The roof supports had given way, leaving the house crumpling and sagging like an old man tired of life.

The house was sad, just like us: Steve, Mum and me. Three lonely castaways marooned together.

Be the first to review I Belong to No One.

I Belong to No One