I Just Couldn't Wait to Meet You 1

by Kate Ritchie and Hannah Sommerville

Much-loved actor and radio host Kate Ritchie's first book is a beautiful tribute to the joy and anticipation of expecting a child.

When you were still a treasured bump, tucked safe away inside, I thought about you night and day and in my sleep - it's true. My heart was full of hope and love. I just couldn't wait to meet you.

A heartwarming story to share with the children in your family.

“ Straight from the heart . . . The perfect gift for a new or expecting parent, or for a soon-to-be-sibling who needs a reminder that they, too, were once a precious bump. ” This Charming Mum

Kate Ritchie is a much-loved actor, presenter and author. Millions of Australians and Britons grew up with Kate as she played Sally Fletcher in the hit series Home and Away between 1987 and 2007.

Kate has continued to act in Australian film and television, including Underbelly: A Tale of Two Cities in 2009, Cops: LAC, Mr & Mrs Murder and It’s A Date. She has hosted live television events including the annual Carols in the Domain and Australia Day Celebrations.

After being invited back as a guest to help celebrate the show’s 25th anniversary in 2013, Kate briefly reprised her role of Sally on the Seven Network’s Home and Away. Her acting has earned her numerous nominations and awards, including two Gold Logies.

In 2008 Kate took on the challenge of live radio. She currently co-hosts Kate, Tim & Marty, the number one rating national drive show, on Nova. Acting aside, Kate relishes the opportunity to donate her time to a number of causes, including the Australia Day Council of New South Wales, the Australian Red Cross and Ovarian Cancer Australia.

Kate lives in Sydney with her husband, Stuart, and daughter, Mae. Her first book, I Just Couldn’t Wait to Meet You, was inspired by her joy and excitement at anticipating Mae’s arrival.

After completing a Bachelor of Creative Arts, she practised as a commercial designer before becoming a mother of two.

Reading with her young children rekindled Hannah’s adoration of children’s picture books and she turned her attention to illustrating.

Hannah enjoys capturing familiar events in the lives of children and focuses on crafting moments to which her readers can connect. 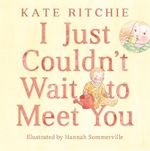 I Just Couldn't Wait to Meet You

by Kate Ritchie and Hannah Sommerville