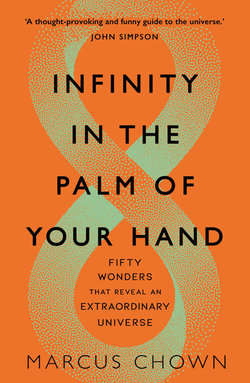 Infinity in the Palm of Your Hand

Our adventures in space, our deepening understanding of the quantum world and huge leaps in technology over the last century have revealed a universe far stranger than we could ever have imagined. With brilliant clarity and wit, bestselling author Marcus Chown examines the profound science behind fifty remarkable scientific facts that help explain the vast complexities of our existence. Did you know that you could fit the whole human race in the volume of a sugar cube? Or that the electrical energy in a single mosquito is enough to cause a global mass extinction? Or that, out there in the universe, there are an infinite number of copies of you reading an infinite number of copies of this?

Infinity in the Palm of Your Hand is a mind-bending journey through some of the most weird and wonderful facts about our universe, vividly illuminating the hidden truths that govern our everyday lives.

Marcus Chown is an award-winning writer and broadcaster. Formerly a radio astronomer at the California Institute of Technology in Pasadena, he is cosmology consultant of New Scientist.

His books include The Ascent of Gravity, What A Wonderful World, Quantum Theory Cannot Hurt You, Felicity Frobisher and the Three-Headed Aldebaran Dust Devil, and We Need to Talk to Kelvin, which was short-listed for the 2010 Royal Society Book Prize.

Marcus has also tried his hand at Apps and won The Bookseller Digital Innovation of the Year for Solar System for iPad. Marcus was a regular guest on the BBC4 comedy-science show, It's Only A Theory, with Andy Hamilton and Reginald D. Hunter, and often appears on Channel 4's Sunday Brunch.

Marcus lives in London with his wife, a Macmillan nurse. Whereas she does a very socially useful job, Marcus writes about things that are of absolutely no use to man or beast! Can time run backwards? Are there an infinity of universes playing out all possible histories? Was our Universe made as a DIY experiment by extraterrestrials in another universe?

Be the first to review Infinity in the Palm of Your Hand.

Infinity in the Palm of Your Hand