This item qualifies for FREE delivery
Bringing together an international and interdisciplinary group of scholars, Intermedialities: Philosophy, Arts, Politics is a comprehensive collection devoted to the new field of research called 'intermedialities.' The concept of intermedialities stresses the necessity of situating philosophical and political debates on social relations in the divergent contexts of media theories, avant-garde artistic practices, continental philosophy, feminism, and political theory. The 'intermedial' approach to social relations does not focus on the shared identity but instead on the epistemological, ethical, and political status of inter (being-in-between). At stake here are the political analyses of new modes of being in common that transcend national boundaries, the critique of the new forms of domination that accompany them, and the search for new emancipatory possibilities. Opening a new approach to social relations, intermedialities investigates not only engagements between already constituted positions but even more the interval, antagonism, and differences that form and decenter these positions. Consequently, in opposition to the resurgence of cultural and ethnic particularisms and to the leveling of difference produced by globalization, the political and ethical analysis of the 'in-between' enables a conception of community based on difference, exposure, and interaction with others rather than on an identification with a shared identity. Investigations of 'in-betweenness,' both as medium specific and between heterogeneous 'sites' of inquiry, range here from philosophical conceptuality to artistic practices, from the political circulation of money and power to the operation of new technologies. They inevitably invoke the crucial role of embodiment in creative thought and collective acting. As a mediating instance between the psyche and society, matter and spirit, nature and culture, and biology and technology, the body is another interval forming and informed by socio-linguistic relations. As these complex intersections between media, materiality, art, and the philosophy and politics of the in-between suggest, the project of intermedialities provides new ways of rethinking relations among arts, politics, and science.

Be the first to review Intermedialities. 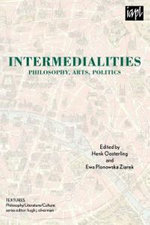