It Doesn't Define Me

Be the first to write a review
Tweet
RRP  $25.99 $25.25
After surviving an ischemic stroke to his spinal cord that robbed him of his independence, Chris embarked on the battle of a lifetime - the fight to get his life back and show the world there is more to a person than a disability.Chris felt his feet, still in surgical stockings, touch the floor the first time he tried to stand after undergoing cardiac surgery. Instead of standing beside his gurney, Chris immediately fell to his knees onto the cold, hard linoleum floor in the CVICU.In the coming days Chris discovered that he could no longer run, walk or even stand and he was unable to feed himself, dress himself or even turn himself in his hospital bed. Learning that some damage had occurred to his spinal cord, the future Chris had planned for himself and his fiancee had been turned upside down. Instead of envisioning living the rest of their lives together, Chris feared that he would never be able to return home and if he did, his fiancee would be forced into the role of his 24-hour in-home care provider.Chris realized that he was in the fight of his lifetime, he knew he must draw upon his past experiences, and fight harder than he ever fought before, to get his life back.Determined to give himself and his fiancee their "happily ever after," Chris battled fear, setbacks and a blood clot that could have killed him as he fought not only to get his life back for himself and his fiancee, but to show the world there was more to him than his disability!

Be the first to review It Doesn't Define Me. 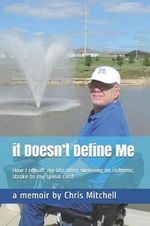 It Doesn't Define Me