Well over thirty million people in the United States speak a primary language other than English. Nearly twenty million of them speak Spanish. And these numbers are growing. Critics of immigration and multiculturalism argue that recent government language policies such as bilingual education, non-English election materials, and social service and workplace \u0022language rights\u0022 threaten the national character of the United States. Proponents of bilingualism, on the other hand, maintain that, far from being a threat, these language policies and programs provide an opportunity to right old wrongs and make the United States a more democratic society. This book lays out the two approaches to language policy -- linguistic assimilation and linguistic pluralism -- in clear and accessible terms. Filled with examples and narratives, it provides a readable overview of the U.S. \u0022culture wars\u0022 and explains why the conflict has just now emerged as a major issue in the United States. Professor Schmidt examines bilingual education in the public schools, \u0022linguistic access\u0022 rights to public services, and the designation of English as the United States' \u0022official\u0022 language. He illuminates the conflict by describing the comparative, theoretical, and social contexts for the debate. The source of the disagreement, he maintains, is not a disagreement over language per se but over identity and the consequences of identity for individuals, ethnic groups, and the country as a whole. Who are \u0022the American people\u0022? Are we one national group into which newcomers must assimilate? Or are we composed of many cultural communities, each of which is a unique but integral part of the national fabric? This fundamental point is what underlies the specific disputes over language policy. This way of looking at identity politics, as Professor Schmidt shows, calls into question the dichotomy between \u0022material interest\u0022 politics and \u0022symbolic\u0022 politics in relation to group identities. Not limited to describing the nature and context of the language debate, Language Policy and Identity Politics in the United States reaches the conclusion that a policy of linguistic pluralism, coupled with an immigrant settlement policy and egalitarian economic reforms, will best meet the aims of justice and the common good. Only by attacking both the symbolic and material effects of racialization will the United States be able to attain the goals of social equality and national harmony.

Be the first to review Language Policy & Identity In The U.S.. 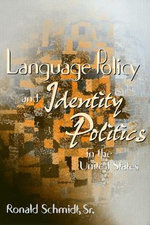