Ryan Rossetti and Jake Thomas were the two Major League-bound rivals on their high school baseball team, until Ryan hurt his pitching arm and landed a $10 dollar an hour life as a house painter. Lucky Jake made it all the way, and he and his $10 million signing bonus are heading back for a publicity-motivated homecoming weekend. But he’s got a nasty surprise in store: Ryan is involved in an intense, addictive relationship with Jake’s fiancé Christina, who now faces a choice between love in a Brooklyn tenement or a heartless marriage on Easy Street.

None of the three have any idea what’s about to play out in the streets they once all called home. Lights out is vintage Jason Starr, a razor sharp crime novel that brilliantly combines biting social satire, explosive suspense, and honest, revealing human drama.

About the Author
Jason Starr is the international bestselling author of many crime novels and thrillers, including Savage Lane. Starr's other novels are Cold Caller, Nothing Personal, Fake I.d., Hard Feelings, Tough Luck, Twisted City, Lights Out, The Follower, Panic Attack, The Pack, The Craving. He has won the Anthony Award twice, as well as the Barry Award, and his books are published in more than a dozen languages.

He has also co-written four novels with Ken Bruen- Bust, Slide, The Max And Pimpand co-edited Bloodlines, an anthology of horse racing stories for Vintage Books. He has written comics and graphic novels for Vertigo (THE CHILL), DC (Batman, Doc Savage, Sand, The Avenger, and Marvel (The Punisher, Wolverine Max, and the original novel Ant-Man Natural Enemy). He lives in Manhattan.

Be the first to review Lights Out . 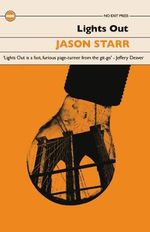 Thriller / suspense Contemporary fiction Crime & Mystery
Hold on while we process your request.