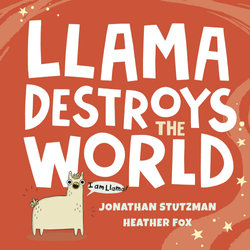 by Jonathan Stutzman and Heather Fox
Hardback
Publication Date: 17/09/2019
Be the first to write a review
Tweet
$14.99

The laugh-out-loud story of a llama who inadvertently destroys the universe.

Meet Llama, a true hero for the ages, who has most definitely driven a bus and who loves cake way more than you.

In their debut picture book, author/illustrator team Jonathan Stutzman and Heather Fox introduce young readers to the hilarious, the oblivious, the apocalyptically adorable Llama. So grab some cake and prepare to dance . . . because the time for Llama is nigh!

Jonathan Stutzman is an award-winning filmmaker and writer. His short films have screened at film festivals all over the world and on television, and he is a contributing writer to the bestselling collection The Tiny Book of Tiny Stories.

He received his masters at Temple University for Film & Media Arts. Jonathan loves reading, traveling, creating, and thinking about all sorts of strange and nerdy things. He lives in Palmyra, Pennsylvania.

Heather Fox is an illustrator of stories for children. Her art is filled with quirk and dashes of whimsy that is created in both doodle and digital forms. When she isn't creating, she is probably drinking a hot cup of coffee, eating Chinese food, or chasing down her dog (Sir Hugo) that has stolen one of her socks. Fox's books for children include The Elephant's Nose and Llama Destroys the World. She lives in Lancaster, Pennsylvania.

Be the first to review Llama Destroys the World.

by Jonathan Stutzman and Heather Fox