Amid the heartbreak and danger of London in the Blitz of WWII, Maggie Johnson finds her courage in friendship and food.

They might all travel the same scarred and shattered streets on their way to work, but once they entered Maggie's Kitchen, it was somehow as if the rest of the world didn't exist.

When the Ministry of Food urgently calls for the opening of British Restaurants to feed tired and hungry Londoners during the Second World War, Maggie Johnson is close to realising a long-held dream.

But after struggling through government red-tape and triumphantly opening its doors, Maggie's Kitchen soon encounters a most unexpected problem. Her restaurant has become so popular with London's exhausted workers, that Maggie simply can't get enough supplies to keep up with demand for food, without breaking some of the rules.

With the support of locals, and the help of twelve-year-old Robbie, a street urchin, and Janek, a Polish refugee dreaming of returning to his native land, the resourceful Maggie evades the first threats of closure from the Ministry. As she fights to keep her beloved Kitchen open, Maggie also tries desperately to reunite Robbie with his missing father, as well as manage her own family's expectations. Ultimately, she can no longer ignore the unacknowledged hopes of her own heart, and the discovery that some secrets have the power to change everything.

Caroline Beecham is a novelist, writer and producer. She is the author of three books: the best-selling novel Maggie's Kitchen, published August 2016, Eleanor's Secret, published May 2018, and Finding Eadie, July 2020.

Her debut novel was shortlisted for Booktopia's Best Historical Fiction in 2016 and nominated for Book of the Year and Caroline for Best New Author by AusRom Today. She has worked in documentary, film and drama, and discovered that she loves to write fiction and to share lesser-known histories; in particular, those of pioneering women whose lives transport us back to the past, yet speak to us now.

Caroline studied the craft of novel writing at the Faber Academy in Sydney, with Curtis Brown Creative in London, and has a MA in Film & Television and a MA in Creative Writing. She lives in Sydney with her husband and two teenage sons, and is working on a fourth novel and adapting Maggie's Kitchen as a drama series.

Be the first to review Maggie's Kitchen. 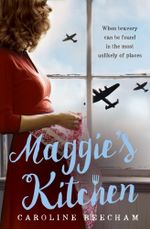