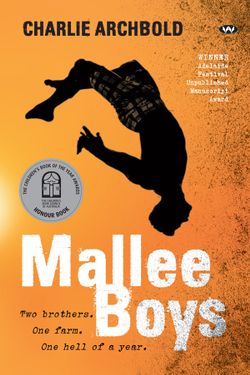 Two Brothers. One Farm. One Hell of a Year.

Sometimes I feel like I'm neither one thing nor another.

I live in the Mallee but I don't like the desert.

I live on a farm but I get hay fever and I'm scared of goats. I like school but my best mates don't. I'm stuck between stuff. It's like I'm not meant to be here but I am.

Sandy Douglas knows that life at fifteen is hard, but it's even harder when your mother died a year ago and nothing's gone right since. His brother Red, on the other hand, is eighteen now and working the farm. He's amped up on rage and always looking for a fight. And then there's their dad Tom. He does his best, but - really he doesn't have a clue.

As Sandy and Red deal with girls, dirt biking, footy and friendship, both boys have to work out who they want to be, without their mum around. The Mallee, where they live, may seem like the middle of nowhere, but it turns out this is going to be one hell of a year.

'Only a teacher/writer like Charlie Archbold could produce a book like this. Those among us who have taught in country towns as young teachers will recognise the character types and the sorts of activities that young kids get up to. Archbold’s teaching under the skies in the bush provides the authenticity that her tale of the Mallee Boys must have.' - Ian Lipke, Queensland Reviewers Collective

'The Australian agricultural community of The Mallee is atmospheric and Charlie Archbold is an exceptional debut author. A dedication to rural communities throughout our sunburnt country.' - divabooknerd

Charlie Archbold was born in London. She completed a degree in drama before training as a teacher and has worked as an educator for twenty-five years.

She recently completed a Master of Education in Studies of Asia. After travelling extensively she settled in Australia and lives with her family in Adelaide. Mallee Boys is her first novel.

Be the first to review Mallee Boys. 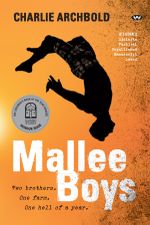