by Sandy George and Amanda Duthie

Over 28 years, on The Movie Show and then on At The Movies, Margaret and David shaped the way Australians saw and talked about cinema - and themselves.

'Margaret and David are critics who love movies to the point of obsession.' - Fred Schepisi

'Thank you for your contribution to the success of our film, but more for your absolute object lesson in how to support, invigorate, challenge and inspire an entire nation's film culture.' - Kath Shelper and Warwick Thornton

Be the first to review Margaret and David. 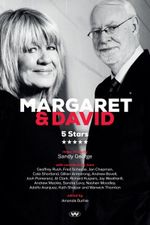 by Sandy George and Amanda Duthie

Film theory & criticism Gift Books Under $20 Humour and Pop Culture
Hold on while we process your request.