Be the first to write a review
Tweet
RRP  $35.99 $33.80
Winner of the National Book Critics Circle Award Winner of the Heartland Prize A New York Times Notable Book One of the Best Books of the Year: The Washington Post, Los Angeles Times, Time, Vanity Fair, Marie Claire, Time Out New York, Minneapolis Star Tribune, Kansas City Star, Men's Journal, Oprah.com Pulitzer Prize-winning cultural critic Margo Jefferson was born in 1947 into upper-crust black Chicago. Her father was head of pediatrics at Provident Hospital, while her mother was a socialite. In these pages, Jefferson takes us into this insular and discerning society: "I call it Negroland," she writes, "because I still find 'Negro' a word of wonders, glorious and terrible." Negroland's pedigree dates back generations, having originated with antebellum free blacks who made their fortunes among the plantations of the South. It evolved into a world of exclusive sororities, fraternities, networks, and clubs--a world in which skin color and hair texture were relentlessly evaluated alongside scholarly and professional achievements, where the Talented Tenth positioned themselves as a third race between whites and "the masses of Negros," and where the motto was "Achievement. Invulnerability. Comportment." At once incendiary and icy, mischievous and provocative, celebratory and elegiac, Negroland is a landmark work on privilege, discrimination, and the fallacy of post-racial America.

The winner of a Pulitzer Prize for criticism, Margo Jefferson is the author of Negroland, which was shortlisted for the Baillie Gifford Prize (formerly the Samuel Johnson) and On Michael Jackson and is a professor of writing at Columbia University School of the Arts.

She was for years a theatre and book critic for Newsweek and the New York Times. Her writing has appeared in, among other publications, the Guardian, Vogue, New York magazine, and the New Republic.

Be the first to review Negroland. 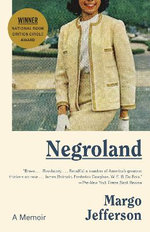