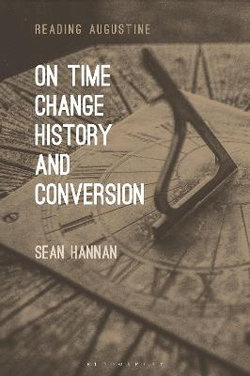 On Time, Change, History, and Conversion

21st century life tends to move at a breakneck pace, and many are left with the sense that there is never enough time to catch up with the ever-changing world. While there is at times a human longing to grasp and halt time, in order to understand our own personal and historical situations, tomorrow's volatility always arrives to overturn today's fragile status quo.

However, these troubles with time are not new. Already in late antiquity, as the Western Roman Empire crumbled around him, Augustine of Hippo realized that this disorientation we feel in the face of change is a symptom of a deeper problem: namely, that we don't really know what time is, even though it conditions every facet of our lives.

On Time, Change, History and Conversion offers a new interpretation of Augustine's approach to temporality, by contrasting it to contemporary accounts of time drawn from philosophy, political theology, and popular science, in clusing Stephen Hawking's A Brief History of Time and Stephen Pinker's Enlightenment Now. Rather than offering us a deceptively simple roadmap forward, Augustine instead reminds us that, before we tackle tasks like transforming ourselves and our world, we first must face up to the question of time itself.

Be the first to review On Time.

On Time, Change, History, and Conversion