Pulitzer Prize
Be the first to write a review
Tweet
RRP  $39.99 $38.90
from "Ozone Journal" Bach's cantata in B-flat minor in the cassette,
we lounged under the greenhouse-sky, the UVBs hacking
at the acids and oxides and then I could hear the difference between an oboe and a bassoon
at the river's edge under cover--
trees breathed in our respiration; there was something on the other side of the river,
something both of us were itching toward-- radical bonds were broken, history became science.
We were never the same. The title poem of Peter Balakian's Ozone Journal is a sequence of fifty-four short sections, each a poem in itself, recounting the speaker's memory of excavating the bones of Armenian genocide victims in the Syrian desert with a crew of television journalists in 2009. These memories spark others--the dissolution of his marriage, his life as a young single parent in Manhattan in the nineties, visits and conversations with a cousin dying of AIDS--creating a montage that has the feel of history as lived experience. Bookending this sequence are shorter lyrics that span times and locations, from Nairobi to the Native American villages of New Mexico. In the dynamic, sensual language of these poems, we are reminded that the history of atrocity, trauma, and forgetting is both global and ancient; but we are reminded, too, of the beauty and richness of culture and the resilience of love.

Be the first to review Ozone Journal. 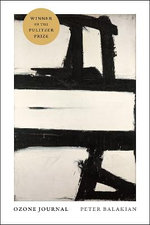