Paths of the Dead

IT WAS NEVER JUST A GAME.

When Amy MacKenzie agrees to attend a meeting at a local spiritualist church, the last person she expects to hear calling to her from beyond the grave is her son. The son whom she'd only spoken to an hour before. Then the body of a young man is found inside a neolithic stone circle high above the city of Glasgow and forensic scientist Rhona MacLeod is soon on the case. The hands have been severed and there is a stone in the victim's mouth with the number five scratched on it.

DI Michael McNab is certain it's a gangland murder, but Rhona isn't convinced. When a second body is found in similar circumstances, a pattern begins to emerge, of a killer intent on masterminding a gruesome Druidic game that everyone will be forced to play...

Paths of the Dead is the next novel in Lin Anderson's esteemed Rhona Macleod crime series.

Be the first to review Paths of the Dead. 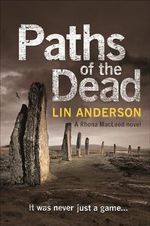 Paths of the Dead

Crime & Mystery Thriller / suspense Tartan Noir
Hold on while we process your request.