Amanda Waller has been imprisoned for a year, and her Task Force X disbanded after they fled her custody while taking down LOA. But the U.S. government isn't finished with the Suicide Squad. Political unrest in the Eastern European country of Vlatava causes Sarge Steel to turn to the dirtiest black ops team in the business, but this time Waller has a price: full autonomy. The Suicide Squad are now free agents. With the help of Batman, Waller reassembles her team of former-prisoners-turned-reluctant-government agents, and from Vlatava to Israel, Task Force X is free to follow where the mission--and the money--takes them. But when a deadly enemy they thought they'd defeated rises from the grave, can the Suicide Squad survive long enough to enjoy their newfound freedom? It's a new era for the Suicide Squad in this collection by acclaimed creators John Ostrander, Kim Yale, Geof Isherwood and Luke McDonnell. SUICIDE SQUAD: THE PHOENIX GAMBIT collects issues #40-49 of the classic series.

Be the first to review Phoenix Gambit. 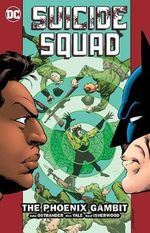