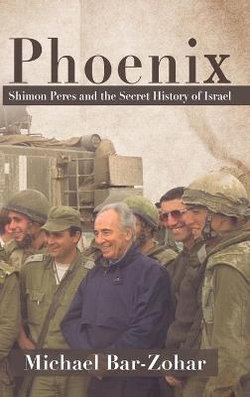 "The Jewish people doesn't know what it owes to Shimon Peres." Said David Ben-Gurion, Israel's founding father.
Indeed, the young Peres, operating in secrecy, was the builder of Israel's military might. In Israel's Independence war, he acquired weapons from all over the world, and later drew the plans for the conquest of the Negev.

Appointed Director General of the Defense Ministry at the age of twenty-nine, he built Israel's Aircraft Industry; later, acting against the advice and the derision of his colleagues, he convinced France to supply Israel with the weapons it so badly needed, and was the architect of the 1956 Sinai Campaign. In a secret agreement with the French Prime Minister, Peres obtained France's help in building Israel's nuclear reactor in Dimona and making tiny Israel a nuclear power.

In a fierce snowstorm he drove to Bavaria, and convinced the German Defense Minister to supply large quantities of weapons to the beleaguered Israel, free of charge. Then in 1976, when an Air France airliner, carrying more than a hundred Israelis, was hijacked by terrorists to Entebbe airport in Uganda, Defense Minister Peres planned with a group of generals the hostages' rescue mission, that stunned the world.

Thus Peres earned his title of "Mr. Security." But as soon as Dimona's nuclear power gave Israel invincibility, he felt that time had come to make peace with the Arab nations. He reached a secret agreement with King Hussein of Jordan, but it was thwarted by right-wing Prime minister Shamir. Refusing to give up, he signed the Oslo agreements with the Palestinian leaders, and established the Peres Center for Peace. Mr. Security had become Mr. Peace. Twice Prime Minister, twice minister of Defense, he became President of Israel in 2007. He died at the age of 93, in 2016.

In 2001, when serving as Foreign Minister, Peres met with Michael Bar-Zohar, the biographer of David Ben-Gurion. "I am of the same age Ben-Gurion was when you started writing his biography," Peres said, "and after what I did for the country I hope that Ben-Gurion's biographer will be also mine."

Bar-Zohar, an author of 35 books of fiction and non-fiction, a professor of political science and a former member of the Knesset, spent several years writing this book, that was completed after Peres's death.

Be the first to review Phoenix.