Psychoanalytic Versions of the Human Condition

Philosophies of Life and Their Impact on Practice

What is psychoanalysis? Whereas there was once a time when proponents of "mainstream psychoanalysis" could point to the preeminence of Freud's drive theory and the version of the human condition associated with it-man as seeking pleasure in an erotically tinged universe-contemporary psychoanalysis is a fractured and contentious discipline in which competing theories share little more than the basic concepts of unconscious mental processes, repression, and transference.

Taking the complexities, ambiguities, and contradictions engendered by psychoanalysis over the past several decades as an encouraging point of departure rather than as evidence of the dissolution of the "psychoanalytic tradition," Psychoanalytic Versions of the Human Condition makes explicit how, within each major theory, a particular story about the nature of the world and what it means to be human decisively shapes how the clinician conceptualizes individual psychopathology and approaches treatment. A chorus of voices that both challenges and reaffirms the theory and practice of psychoanalysis, Psychoanalytic Versions of the Human Condition asks urgent questions-about the politics of psychoanalytic knowledge, and about how the profession is situated and operates in our contemporary culture. Whether Freudian, Jungian, Kleinian, Kohutian, Lacanian, or hybrid, the clinician will find this book a useful guide to understanding how each theory's "philosophy of life" infuses clinical work.

Be the first to review Psychoanalytic Versions of the Human Condition. 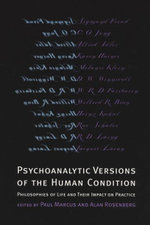 Psychoanalytic Versions of the Human Condition