Pulitzer Prize
Be the first to write a review
Tweet
$19.99

It's 1979 and Rabbit is no longer running. He's walking, and beginning to get out of breath. That's OK, though - it gives him the chance to enjoy the wealth that comes with middle age. It's all in place- he's Chief Sales Representative and co-owner of Springer motors; his wife, at home or in the club, is keeping trim; he wears good suits, and the cash is pouring in. So why is it that he finds it so hard to accept the way that things have turned out? And why, when he looks at his family, is he haunted by regrets about all those lives he'll never live?

John Updike was born in Shillington, Pennsylvania, in 1932. He graduated from Harvard College in 1954 and spent a year in Oxford, England, at the Ruskin School of Drawing and Fine Art. From 1955 to 1957 he was a member of the staff of The New Yorker.

His novels have won the Pulitzer Prize, the National Book Award, the National Book Critics Circle Award, the Rosenthal Foundation Award, and the William Dean Howells Medal. In 2007 he received the Gold Medal for Fiction from the American Academy of Arts and Letters. John Updike died in January 2009.

Be the first to review Rabbit is Rich. 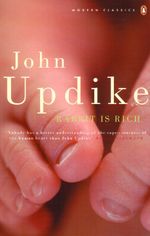