4/5 Rating 1 Reviews Add your review Edit my Review
Tweet
$34.25
Recent studies have shown that puzzle-solving and wordplay are among the most effective ways to boost the power and agility of your brain. A cryptic crossword a day can help keep memory loss at bay.

Why? The answer lies in the art of teasing out a clue, a discipline that calls for logic, interpretation, intuition and deduction as well as the ability to filter nuance and connotation. All these challenges and more are found in the cryptic crossword. And all are invaluable in increasing your brainpower and improving your memory and cognitive capacity.

In this entertaining and essential book, cryptic crossword guru David Astle explains how your brain responds to and benefits from attempting these crosswords. A growing body of research suggests cryptic crosswords are the ideal workout for your brain, and Astle shows how regular training of this kind can be fun as well as fundamental.

If you've always been intimidated by cryptic crosswords, fear not! Rewording the Brain is an accessible guide to developing and sharpening your puzzle talents. Novices and expert solvers alike will gain plenty of cryptic insights. There has never been a better time to start solving, nor a better teacher than the legendary DA.

David Astle has written two novels, plus five non-fiction works: Cluetopia, Puzzled, One Down, One Missing, Offbeat Australia and Riddledom.

Between books, he drives the world to delight and despair as Friday's crossword setter, DA, appearing in both The Sydney Morning Herald and The Age.

Which is possibly a compliment. David was the former dictionary bloke on SBS's Letters and Numbers, while his feature stories have tackled luck, lying, drowning and fridge magnets, to name a few topics.

His short stories have won several awards, including a trip to Beijing via Dublin as part of the James Joyce Suspended Sentence Prize in 2001. 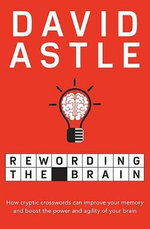 Crosswords Popular science Science: general issues
Hold on while we process your request.