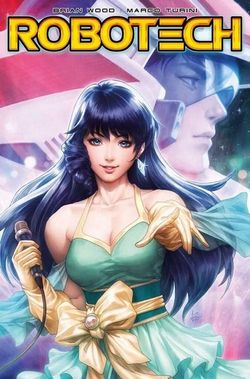 The world-famous, fan-favourite animated epic returns to comics with a classic transforming-jetfighters-versus-giant-aliens adventure!

Return to the fan-favourite Macross Saga that began the classic Robotech franchise, as hotshot Veritech pilot Roy Fokker and skilled rookie Rick Hunter are pulled into an intergalactic war when the Earth is invaded by the insidious Zentraedi!

Whether you’ve seen the classic cartoon to the point you can quote every episode, or whether you’ve never experienced Robotech before, this graphic novel collection is for you! The first issue of the comic was reprinted twice within weeks of its release.

Brian Wood is an American writer, illustrator, and graphic designer, known primarily as a comic book creator. having worked for DC, Marvel, Image, Dark Horse and Titan Comics, amongst others.

“Titan Comics has taken the classic anime and re-mastered it with a bold, new, cinematic vision, in comic book form.” - Critical Blast

”Welcome to one of the greatest series of all time. 5 out of 5.“ - Comic Crusaders

Brian Wood is a New York Times Best-selling author. He's written The X-Men and Moon Knight along with some of the biggest titles in pop culture, including Star Wars, Aliens, Conan The Barbarian, and Terminator.

He co-wrote the story for the award-winning video game 1979 Revolution, and is currently adapting multiple series for television, includin Briggs Land at AMC.

Be the first to review Robotech .