In a perfect world, what is there left to fear? A chilling and thought-provoking sci-fi novel from New York Times bestselling author Neal Shusterman.

A dark, gripping and witty thriller in which the only thing humanity has control over is death. In a world where disease, war and crime have been eliminated, the only way to die is to be randomly killed ("gleaned") by professional scythes.

Citra and Rowan are teenagers who have been selected to be scythes' apprentices, and despite wanting nothing to do with the vocation, they must learn the art of killing and understand the necessity of what they do.

Only one of them will be chosen as a scythe's apprentice and as Citra and Rowan come up against a terrifyingly corrupt Scythedom, it becomes clear that the winning apprentice's first task will be to glean the loser.

In a utopian world where humanity has conquered death, it is a privilege to kill… but not everybody feels that way. In this deadly YA thriller from Neal Shusterman, teenagers Citra and Rowan have been selected to be scythes’ apprentices so they can study the art of killing, in order to curb a growing population. As Citra and Rowan reluctantly embark on their journey to become scythes, they eventually uncover hidden depths of corruption that will leave both their lives hanging precariously in the balance.

With a premise like that plus an absolutely stunning cover I was hooked right from the start, but luckily Schusterman delivers on far more than just cover appeal. Scythe is a captivating and visceral story that explores the darker side of utopia, and what it means to be human when the limits of life no longer exist. If you’ve been mourning the void left by the Hunger Games trilogy, then you absolutely need to give this a read. 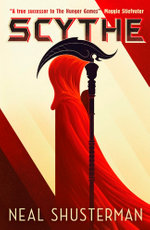