It’s 1890. Holmes’ fame has spread even to the colonies and he and his stalwart chronicler Watson are swept up in an array of mysteries ‘down under’. They find themselves summoned from location to location, dealing with the exciting and unique mysteries of this strange island continent.

Christopher Sequeira is a writer and editor who specialises in mystery, horror, science fiction and super-heroes. His short stories and articles have been published in Australia, the UK, the USA and Canada.

He has also written scripts for flagship superhero comic-books, such as Justice League Adventures for DC Entertainment, and Iron Man and X-Men stories for Marvel Entertainment.

He has created original characters and edited and published comics in Australia, including the Tides of Hope anthology that raised $10,000 for charity in the wake of the national disaster that was the Queensland floods of 2010. Sequeira, his wife, and two children, reside in Sydney.

Be the first to review Sherlock Holmes : The Australian Casebook. 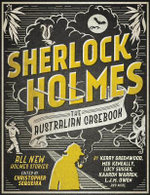 Crime & Mystery Historical Fiction
Hold on while we process your request.