Be the first to write a review
Tweet
RRP  $36.99 $36.25
Luiselli's essays (originally published in Mexico) have been released to great acclaim abroad and has been translated for and published in the UK, Italy, Germany, and The Netherlands
Alma Guillermoprieto called Luiselli "one of the most important new voices in Mexican writing" at BEA and Luiselli is similarly known to and beloved by Latin American writers and venues including PEN America, the Americas Society, and the Mexican Cultural Institute
Luiselli's work is well known to bilingual Spanish language readers (including invitations to appear at Instituto Cervantes in Chicago and the Spanish language bookclub at McNally Jackson)
Luiselli is an engaging and articulate explicator of her work and has made major appearances in support of it including the Hay Festival in the UK and festivals in Germany, Mexico, and Japan. She is connected to and has already seen interest from PEN World Voices for an appearance there
While the book is in translation, the essays take place in the US, Mexico, and elsewhere, making it cosmopolitan and truly international
We're making a major push into translation and essay, this will be published simultaneously with Luiselli's novel, which is informed by the essays
Will include an excerpt of the novel

Be the first to review Sidewalks. 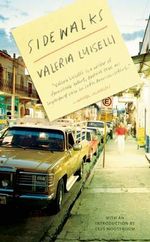