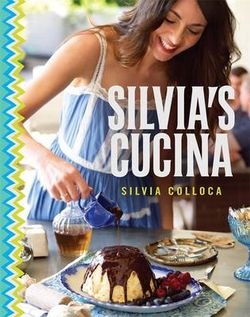 'Italians are passionate and opinionated about their food and I am no exception!' Italian-born food lover, blogger and actress Silvia Colloca offers us her personal insight into authentic Italian home cooking. Now living in Australia, she is quick to correct the misconception that every dish must be drowned in olive oil or topped with a thick coating of parmesan. On the contrary, Silvia's everyday recipes are simple, light and healthy, and based on fresh, seasonal ingredients. This is the food she grew up with. This is how Italians really eat. Step into Silvia's kitchen and sample such goodies as twice-cooked cinnamon galettes, watermelon rind jam, white wine and fennel crackers, Abruzzese fisherman's stew with garlic toast, ricotta gnocchi with cavolo nero pesto, and strawberry and mascarpone cake. Silvia's warmth, humour and thoughtful instructions show you how easily it can be done in your own kitchen.

After spending her childhood in the kitchens of her mother and grandmothers, Silvia absorbed much of their Italian culinary heritage.

Since moving to Australia several years ago, Silvia has kneaded, beaten, rolled, chopped and pounded her way to an authentic Italian identity in her Sydney kitchen.

Silvia and her husband Richard Roxburgh have two young sons, Raphael and Miro.

Silvia's first cookbook, Silvia's Cucina, was published in 2013, and her second book, Made in Italy with Silvia Colloca, published in 2014, in conjunction with her debut television series of the same name.

Be the first to review Silvia's Cucina. National & regional cuisine Australian Books
Hold on while we process your request.