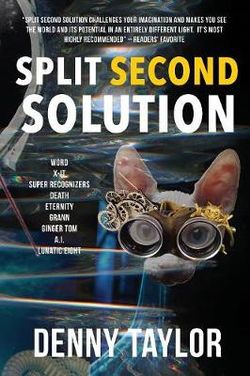 Bio-punk. Weird literature. A sci-fi fantasy that is frighteningly real. Split Second Solution is a dystopian urban novel set in New York City in 2022 that predicted the rise of Trump (the Ginger Tom) and anticipates his fall. Here's a review:

From the opening scene I felt I was reading something like a Miyazaki masterpiece. The descriptions are so vivid that only his genius talent for animation could capture them. Just as Howl's Moving Castle takes you on a journey with both darkness and light, here there is palpable evil and fragile heroism in non-clichEd plot twists and turns. Required reading for our times. (A. Miletta)

At the beginning of Split, the Sick Reapers and A.I. have seized power and captured Word. To escape being raped and killed, Word jumps into the Hudson River and Death splits the last second of her life to save her. And, it is in the last split second of Word's life that the entire story is told.

The evil antagonists are:

Ginger Tom: Seized power before the novel begins; consumed by idolatry of self; protected by personal militia and Super Recognizers; gaslights the public; orders purges of people and books; hunts Word because she is the Last Truth Keeper.

Super Recognizers: Controlled by Ginger Tom and the Lunatic Eight; known as "Sick Reapers"; by 2022 Sick Reapers are in power; psychopathic obsession with capturing Word.

The brave protagonists are:

All lives are in jeopardy. No one is safe. The age of women begins.

Be the first to review Split Second Solution.