A series of assassinations leaves the country in turmoil, and Alex Cross faces his biggest challenge yet in the latest instalment to the bestselling series by James Patterson.

From the writer of Sunday Times no. 1 bestseller, The President is Missing.

Men and women from across the nation line the streets of Washington D.C. to mourn the unexpected death of the President. Hit by painful memories of the loss of his first wife, Alex Cross is left reeling by this tragedy.

A sniper's bullet strikes another devastating blow to the heart of Washington with the assassination of a prominent Senator. The shock of this attack puts huge pressure on the police to deliver a speedy response, and as Chief of Detectives, Alex's wife Bree Stone is given an ultimatum: solve the case, or lose her job.

The new President calls on Alex Cross to lead an unparalleled FBI investigation to help capture America's most wanted criminal. Alex has a terrible feeling that the assassination is just the beginning of a much larger plan. All too soon this fear springs to life as a terrifying chain of events plunges the government and the entire country into chaos.

The stakes have never been higher for Alex Cross as his courage, his training and his capacity for battle are stretched to their limits in the most important case of his life.

Be the first to review Target: Alex Cross. 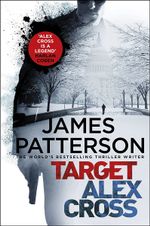