The Curious Story of Malcolm Turnbull 1

The Incredible Shrinking Man in the Top Hat

A hilarious and deeply irreverent take on the political life and times of our twenty-ninth prime minister and his stumbling government.

The even more elaborately-titled sequel to The Short and Excruciatingly Embarrassing Reign of Captain Abbott, this is a tale of a muddling and middling prime minister and his attempts to steer his inertia-heavy government away from electoral disaster.

Fairfax columnist Andrew P Street details the litany of gaffes, blunders and questionable calls that have followed from the bold promise of mature politics offered by Malcolm Turnbull on the day he did Tony Abbott out of the top job.

Expect tales of submarines, GST rises, the joys of negative gearing, offshore tax havens and offshore detention, and a whimsical cast of Delusional Conservatives and Mal-contents, versus an opposition with a rich history of snatching defeat from the jaws of victory - with the ever-present ghost of the ex-PM rattling its chains throughout.

This is a book that answers the question, 'Can a government win an election when its apparently not even sure if it wants to govern anymore?' With Malcolm Turnbull cast as Mr Harbourside Mansion by one of his own, who would have thought it could have come to this?

Here is a unique take on politics Australian style. You know, again.

'A piece of political portraiture shot through with an antic, larrikin spirit' - The Australian on The Short and Excruciatingly Embarrassing Reign of Captain Abbott

Andrew P Street is an Adelaide-built, Sydney-based journalist, editor, columnist and failed indie rock star responsible for 'View from the Street' in the digital edition of the Sydney Morning Herald.

Over the last two decades he's been published internationally in Time Out, Rolling Stone, NME, The Guardian, GQ and Elle.

This is the follow up to his bestselling The Short and Excruciatingly Embarrassing Reign of Captain Abbott. 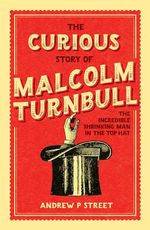 The Curious Story of Malcolm Turnbull