A heart-racing thriller from the no. 1 international bestselling author

Military CID investigator John Puller has returned from his latest case to learn that his brother, Robert, once a major in the United States Air Force, and an expert in nuclear weaponry and cyber-security, has escaped from the Army's most secure prison. Preliminary investigations show that Robert - convicted of treason - may have had help in his breakout. Now he's on the run, and he's the military's number one target. John Puller has a dilemma.

Which comes first: loyalty to his country, or to his brother? Blood is thicker than water, but Robert has state secrets that certain people will kill for. John does not know for certain the true nature of Robert's crimes, nor if he's even guilty. It quickly becomes clear, however, that his brother's responsibilities were powerful and far-reaching.

With the help of US intelligence officer Veronica Knox, both brothers move closer to the truth from their opposing directions. As the case begins to force John Puller into a place he thought he'd never be - on the other side of the law. Even his skills as an investigator, and his strength as a warrior, might not be enough to save him. Or his brother.

"One of the world's biggest-selling thriller writers, Baldacci needs no introduction ..." - Daily Mail

David Baldacci is a worldwide bestselling novelist of titles such as The Fix, No Man's Land and End Game. With over 130 million copies in print, his books are published in over 80 territories and 45 languages, and have been adapted for both feature-film and television.

He has established links to government sources, giving his books added authenticity. David is also the co-founder, along with his wife, of the Wish You Well Foundation®, a non-profit organization dedicated to supporting literacy efforts across the US. 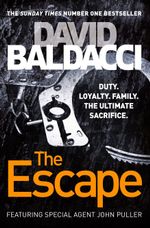