The Eye of the Sheep

Ned was beside me, his messages running easily through him, with space between each one, coming through him like water. He was the go-between, going between the animal kingdom and this one. I watched the waves as they rolled and crashed towards us, one after another, never stopping, always changing. I knew what was making them come, I had been there and I would always know...

Meet Jimmy Flick. He's not like other kids - he's both too fast and too slow. He sees too much, and too little. Jimmy's mother Paula is the only one who can manage him. She teaches him how to count sheep so that he can fall asleep. She holds him tight enough to stop his cells spinning. It is only Paula who can keep Jimmy out of his father's way. But when Jimmy's world falls apart, he has to navigate the unfathomable world on his own, and make things right.

Sofie Laguna's first novel One Foot Wrong received rave reviews, sold all over the world and was longlisted for the Miles Franklin Literary Award and shortlisted for the Prime Minister's Literary Award. In The Eye of the Sheep, her great originality and talent will again amaze and move readers. In the tradition of Room and The Lovely Bones, here is a surprising and brilliant novel from one of our finest writers. Sofie Laguna originally studied to be a lawyer at the University of New South Wales, but after deciding law was not for her, she moved to Melbourne to train as an actor. Sofie worked for a number of years as an actor at the same time as completing a Diploma in Professional Writing and Editing at the Royal Melbourne Institute of Technology. Sofie is now an author and playright writing for both adults and children.

Her many books for young people have been named Honour Books and Notable Books in the Children’s Book Council of Australia Book of the Year Awards and have been shortlisted in the Queensland Premier’s Awards. She has been published in the US and the UK and in translation throughout Europe and Asia.

Her picture book, On Our Way to the Beach, was included in the White Raven 2005 annual selection of outstanding international children’s books by the International Youth Library (Associated Project if UNESCO) In 2008 Sofie released her first novel for adults, One Foot Wrong, to international acclaim. It was shortlisted for the Prime Minister’s Literary Awards and long-listed for the Miles Franklin Award. Screen rights for the book have been optioned and Sofie has recently completed the screenplay.

In 2011, Sofie moved back to writing for children with the highly popular and best-selling Our Australian Girl: Meet Grace series, published by Penguin Books. She has recently written the equivalent for boys Do You Dare: Fighting Bones.

In 2014, Sofie published her second novel for adults The Eye of the Sheep. Sofie continues to write for a wide readership, from picture books for very young children, to series for older readers, to novels for adults. Sofie lives in Melbourne with her partner and their two young sons.

Be the first to review The Eye of the Sheep. 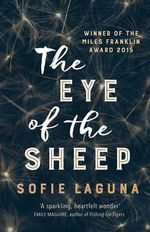 The Eye of the Sheep