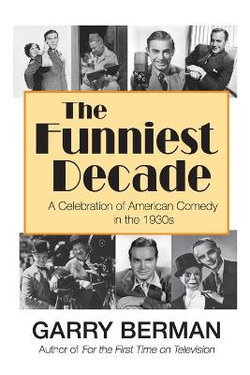 "Author Garry Berman gives readers a history lesson in comparing and overlapping the mediums of radio artists and film comedies during the decade of the 1930s. In doing so, he has not only created a new format, he has brought in fresh perspectives of the people that made the magic."

"It is a thorough and fascinating study, filled with interesting details."

If there was ever a "Golden Decade" of American comedy, it was the 1930s. At the dawn of that remarkable, laugh-filled era, comedians had, for the first time, three performing venues available to them: the stage, radio, and talking films (plus, in the final year of the decade, the arrival of television), resulting in this ten-year span producing the finest performances by the greatest comedians ever to make audiences laugh. In film, comedy titans Laurel & Hardy, The Marx Brothers, and W. C. Fields all reached their creative peaks, as did Mae West, Our Gang (a.k.a. The Little Rascals), the Three Stooges, and less-remembered teams such as Wheeler & Woolsey, Clark & McCullough, and the Ritz Brothers.


On the stage, comedians including Bert Lahr, Fannie Brice, Jimmy Durante, and Wynn all thrived, while expanding their respective careers into films and radio.


The Funniest Decade devotes one chapter to each calendar year of the 1930s, covering the landmark comedy films, radio programs, and stage performances of each year, while focusing on the individual comedians and comedy teams at key moments in their professional careers, including their first major creative and popular breakthroughs. Dozens of photos, too!

Entertainment historian Garry Berman has been writing about pop culture-especially television, music, and films-for over twenty years. He has contributed to Nostalgia Digest magazine, History magazine, and Beatlefan. He has also written and/or published several comedy scripts and humorous short pieces. This is his sixth non-fiction book.

Be the first to review The Funniest Decade.